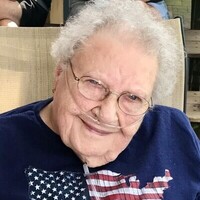 She was born Joan Rosie Hennek on December 31, 1930, in Lexington, Nebraska to Claude and Rosie (Hofreiter) Hennek.

There were three "Joan's" in her grade school classroom, so their teacher assigned them each a different spelling to keep them straight. That is why she spells her name differently than what is on her birth certificate. Joanne attended public schools in Lexington and graduated from Lexington High School with the class of 1949.

She married Addison K. Winter on June 14th, 1950, and moved to Sumner, Nebraska to farm. Two children were blessed to this union: Louise and Mark. They raised two children, many cows and a lot of corn.

She began a career as a school cook at SEM Schools which lasted for several years.

After nearly 50 years of marriage, A.K. passed away in 1999, and Joanne continued to live on the farm for a few years with their dog, Liz. Then in 2002 she moved to Omaha to be near family there.

She loved family get togethers, going to recitals, school activities and horse shows. The whole Winter Family even took a Thanksgiving Disney Cruise together in 2013!

Besides being a great cook, she was an avid crocheter and artist in her younger years.

Her recent interests were mostly keeping up on what her grandkids were doing and visiting with friends and neighbors. She loved tuning into the gameshow network and recently began enjoying an evening "tea-time" before bed.

Mass of Christian Burial will be on Friday, July 15, 2022 at 10:30 a.m. at St. Ann’s Catholic Church in Lexington with Father Jose Chavez, officiating.

Interment will be in Greenwood Cemetery at Lexington.

Memorials are kindly suggested to the family for later designation.

Reynolds-Love Funeral Home in Lexington is honored to be assisting the family with arrangements. Please share online condolences with the family by visiting: reynoldslovefuneralhome.com