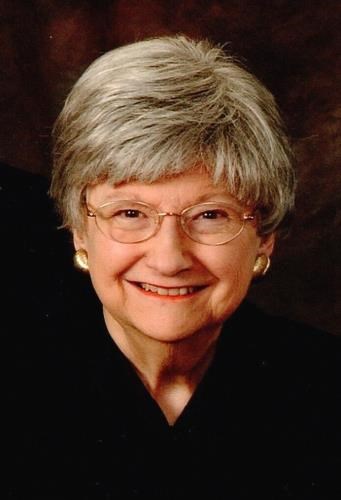 Mary Rebecca 'Becky' Hohnbaum of North Platte, died July 10, 2022, at the Sutherland Care Center in the arms of her loving husband of 62 years after a struggle with dementia. She was 84 years old.

Services will be held at 10 a.m. on Wednesday, July 13, 2022, at Episcopal Church of Our Savior. The casket will be closed at the church.

Cremation will follow then Becky will be placed in the Columbarium of the Resurrection Atrium at Episcopal Church of Our Savior.

Visitation is 10 a.m. to 7 p.m. Tuesday at Odean Colonial Chapel at C & Sycamore, which is in charge of arrangements.

Becky, a Christmas gift to Frank Leslie and Mary Catherine (Hatfield) Lee, was born December 25, 1937, at Lexington. She grew up on a farm east of Lexington and was active in the First Methodist Church. Becky attended rural school then graduated from Lexington High School. She went on to receive her Bachelor of Arts in Education from Nebraska Wesleyan University in Lincoln then did her graduate work at Wayne State College and at several other colleges. Becky's first teaching job was at a grade school in York.

While attending Nebraska Wesleyan, Becky met the love of her life, Jerry A. Hohnbaum, and they were married at the First Methodist Church in Lexington on June 4, 1960. In 1977, the Hohnbaums settled in North Platte. Becky taught grade school at Hershey and in North Platte at Osgood and Hall School and also tutored for the North Platte High School.

During her graduate studies, Becky became interested in working with students who were having troubles in school so after 20 years of teaching she and Jerry opened the R&J Learning Center in North Platte where she tutored. Becky had a passion for helping students reach their potential. One student which she helped get through junior and senior high, "went out on his own" to finish college and law school and is now a judge in another state. She was so proud of his and the others accomplishments.

Becky was an active member of Episcopal Church of Our Savior where she was in the choir and served on other church groups.

In lieu of flowers, memorials are to the church.

Online condolences may be shared at odeanchapel.com.